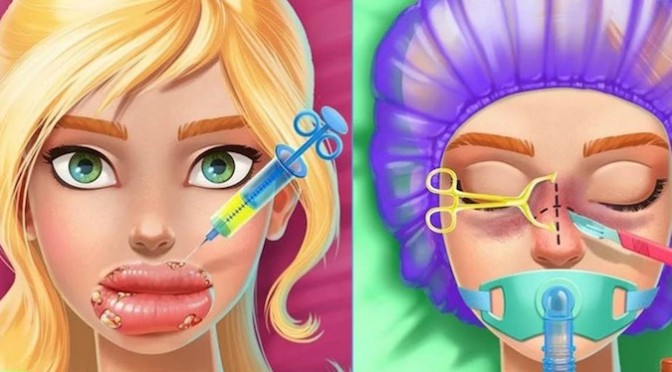 I’m confused. You have cosmetic surgery apps targetting children as young as nine. Have your respective Boards secretly married into the Kardashian clan, or has Donald Trump been having a word about creating more anxiety and unrest and bigotry in the next generation?

One of the games, called Plastic Surgeon, lets you get eye lifts, nose jobs, lip implants and a new face, and says, ‘Every girl dreams of a delicate face and stunning figure – if make-up doesn’t give you the beauty you want then join the amazing plastic surgery game!’

Wtf? This is not the way to raise strong confident girls! (And women don’t want to be delicate, as that sounds like it breaks easily). I don’t know about your daughters but I don’t want mine fantasising about having sausage lips like the above. I mean, OUCH.

Giving young children – often free – access to cosmetic surgery games is not teaching them to celebrate their originality or making them feel good about themselves. It’s telling them to look for flaws. At nine. It’s reinforcing the same message they will get their whole life from billboards and magazines: that there is only one kind of beauty.

Games that make dark skin whiter, chisel larger noses, plump up lips, shave off weight, and turn eyes round and Disney-like create judgment, and fear of being different. They say having the flawless, small-nosed, white-skinned Western look is the path to happiness. That’s bollocks.

As a mother of an eight and nine-year-old, I don’t want my children growing up doubting their appearance or thinking it’s some kind of DIY project that needs fixing. With scalpels.

These games use princesses, mermaids and cartoon faces, which attract young kids. Cosmetic surgery is an adult decision. It’s not child’s play. We need kids to be kids, and to fuel their imaginations, not fears. They need games that foster confidence, not shame. Games that let them own their uniqueness, and slay dragons, not shave off bones to look pretty.

Who is going to be quite loud about this.

Because these games are just all kinds of wrong. Wouldn’t you agree? 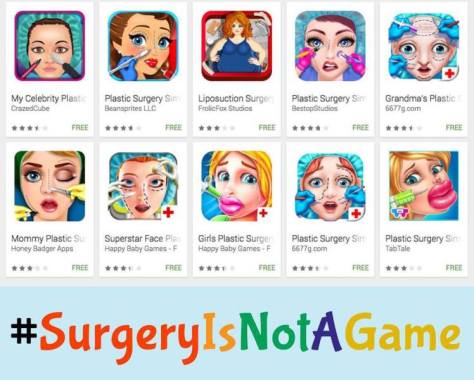 Endangered Bodies worldwide, headed by Susie Orbach, are petitioning Tim Cook at Apple, Jeff Bezos at Amazon, and Sundar Pichai at Google to change their policies around these apps. And not allow cosmetic surgery games that use cartoon faces to target children.

We’ve got petitions going around the world. We’re up to 16,000 signatures, which is fantastic, but we need more.

I’ve started the New Zealand one here if you have a moment to sign. Or here is the petition in the US, the UK, Australia, Germany, Ireland, Argentina and Brazil.

And then please wave your arms loudly on social about this as together we can make change. Thank for your your time.

Angela Barnett is a New Zealand-based writer and commercial storyteller. She is Editor at Fucking Awesome Bulimics I Know. This post originally appeared on her personal blog site.