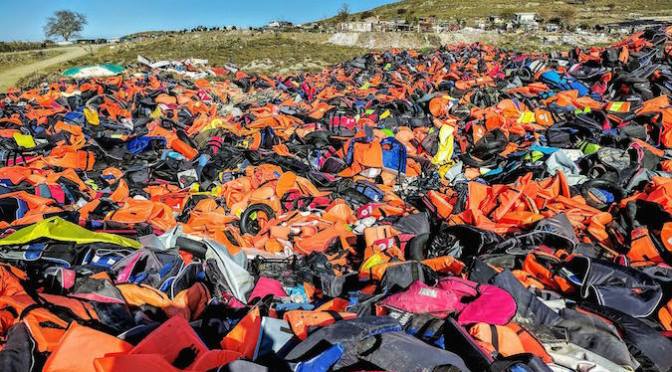 For the last five months Josh Webb has been volunteering at Moria refugee camp in Greece. New Zealand-born, Josh relocated to New York City in 2007, landing a job as Director of Digital Products at MTV. In November 2015 he left MTV, packed a bag and hit the road. While travelling in India he received a message from a friend, saying she had started volunteering at a refugee camp on the island of Lesvos – a main landing ground for those attempting to claim asylum in Europe by journeying from Turkey with so-called people smugglers. Josh was soon also Lesvos-bound, and would end up at Moria.

Since the signing of the March 18 EU-Turkey agreement things have complicated further for refugees: those who make the often treacherous crossing from Turkey to Greece now risk being returned directly to Turkey, rather than being held for processing. Reaction to this change has been mixed, with the EU saying the agreement “targets the people smugglers’ business model and removes the incentive to seek irregular routes to the EU, in full accordance with EU and international law”, while critics argue it breaks international law, potentially endangers asylum seekers further, and is an affront to their human rights. Sarah asked Josh for a firsthand take.

What is the current situation in Lesvos?
Lesvos is now pretty quiet in terms of smuggling refugees. It got very quiet last month, when Frontex – the EU border police – and the Hellenic coastguard dramatically stepped up their patrols, which also coincided with the closing of the Macedonian border. Smugglers were worried about operating with increased scrutiny and I think refugees decided to ‘wait and see’ what would happen, by and large. Many of the refugees that were still coming were from non war-torn countries, so the voices echoing around Moria camp was suddenly speaking Urdu and Punjabi rather than Arabic and Farsi. It was very different in March than it was in December and January, when I previously visited. Totally different mood and less sense of urgency, and the volunteer crews had become well-oiled machines rather than the mad rush of earlier in the year.

Read Josh’s compelling account of his initial visit to Lesvos.

Who have you been you working with in Lesvos?
I moved to the mainland – Idomeni area, north of Thessaloniki, near the Macedonian border – because that’s where the approximately 45,000 refugees are living as they wait for something to happen. What are they waiting for? Borders to open? Greece to suddenly become a place of opportunity? Allah to deliver a miracle? They are the group that is sandwiched in the centre of two other refugee groups – the first was the large mass that were offered passage and asylum in western Europe, and the other is everyone who arrives from now on and will be deported to Turkey or their home countries. But the ones in Idomeni are in limbo, maybe for the foreseeable future. The vast majority are Syrian and Kurdish.

Are you able to comment on the March 18 agreement that essentially facilitates the return of refugees from Greece to Turkey?
All I know is that it’s happening, and affecting those who arrive now, but not those who were already in Greece before March 20. The ones who made it before the deal was done are the people I’ve been working with. They are now being slowly moved to Greek military-controlled camps – that’s being kept pretty quiet – but also have access to a system of application for relocation in the EU. It can take months and they don’t get to choose where they are taken, so it rules out any family reunions. The application process involves them making a Skype call to an account that never seems to be available. I tried calling it and a number of Syrians showed me their call logs, being unanswered repeatedly. It’s very mickey mouse. Many of them have refused to do it because it means they might be sent to some place like Bulgaria or Serbia where, in their opinions, they would probably be worse off than they already are in Greece. So they sit and wait. And protest.

You recently met with a friend, Atiq, you made during your first visit to Lesvos. Atiq has since been resettled in Berlin. Where are things at for him?
Yes, I spent a few days in Berlin and mainly with Atiq. There’s a video on my Facebook page where I interview him about his experiences. It’s a pretty interesting watch if you have a minute. I also started to connect him, and some other Afghanis he knows over there with a few people that I know in Berlin. I think making the connections, and friends, there is pretty important. I have a friend doing a software startup over there and I had the idea to try to get some Syrian software engineers involved as developers for him, so that’s my next project.

What are your plans from here?
I guess I’ve now started to take a look at the ‘end’ of the journey; there are obviously a lot of refugees now trying to start a new life in Europe or elsewhere. The funny thing is that I just came home to Dunedin for a few days and last week the first group of Syrian refugees arrived in Dunedin. That is just a coincidence. It’s quite crazy to think about how lucky this little group of families is to have ended up coming here.

Do you still technically live in NYC?
I’m still NYC-based for now. I was at MTV until November 2015, when I took a break to travel, volunteer and think. I had been working on some activism-related material at MTV, for example the show Rebel Music, and so I had started following some world events more than usual, and particularly Middle East stuff. Now I’m considering a move but not sure where, if anywhere to go after NYC – it’s a tough call. I’m also about to become a US citizen, which is ironic after working with so many refugees lately, and not even being sure if I want to stay there. Just like everything in this crisis it’s a strange luck of birth and privilege I have, with no way to really apportion that to someone else, even if I wanted to.

For more information, and updates follow Josh on Facebook. Help him stay on the move by donating here.

A protest organised jointly by volunteers and refugees at Moria camp 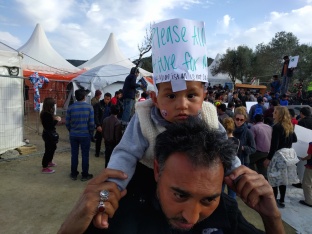 An Afghan child joins a protest at Moria

An Afghan man prepares for a peaceful demonstration at Moria

Getting washed up after playing sports at Moria

People sleeping on train tracks at Idomeni camp. A baby was born on the tracks within a couple of days of this photo

Refugees block the main road from Greece to Macedonia, causing a backlog for hours. In their eyes they are punishing Macedonia for closing its border 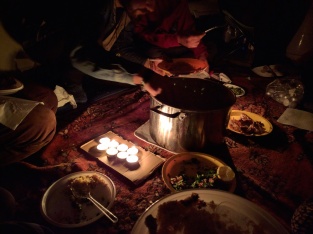 Sharing a meal with a group of volunteers and refugees cohabitating in a warehouse in northern Greece. No lights or electricity but high spirits abound 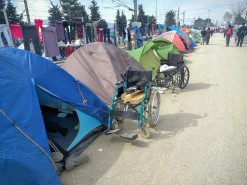 The juxtaposition here seems horrific, as the elderly and disabled are forced to sleep on the ground