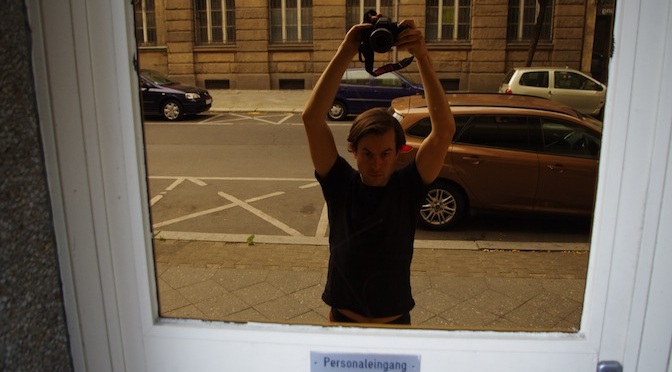 Over the past nine days* Kreuzberg, Berlin has been witness to a major police operation, after a group of roughly 40 asylum seekers refused to leave an abandoned school that was being used as a refugee centre. More than 200 asylum seekers had been squatting inside the Gerhart-Hauptmann Schule on Ohlauer Straße for 18 months, as part of a refugee movement protesting the rules that apply to asylum seekers in Germany, including that they are forced to live in camps (“lagers”). Conditions within the school were described as squalid – in a large part because there was only a single shower – and there had been several incidences of violence in the school; one month ago a man was fatally stabbed by another resident. The heat was on politicians to deal with the problem, or so they might frame it. Neighbours reported feeling safe in the area. The school is barely visible, set back from the street and surrounded by trees.

When the political decision came to clear the school, 900 police arrived, cordoned off three streets around the school and ordered all the asylum seekers to leave. The majority did, apparently not even allowed to retrieve their belongings. 40 remained behind, refusing to leave: they went to the third floor of the school, and the roof, some threatening to jump if the police stormed the building.

And so the police cordon remained in place, with barricades, police vans and a large number of officers blocking access to several streets. The physical fact of the cordon served to galvanise public opposition, and created an area for people to come – to actively protest, or to merely sit on the road, chalking slogans on the ground and drinking beer, reminding the police that their actions were being watched. On one of the first evenings, when there were only three or four people standing outside the cordon on Wiener Straße, I saw a police van drive only a few metres from inside the cordoned area, to the main street. 10 or so police in riot gear climbed out of the back and proceeded to arrest a couple that had seemingly just been standing innocently, watching the cordon (as I had been doing).

The shutting down of the streets – public spaces with shops and housing, bars and kindergartens – was a reminder that as a citizen your rights are limited and temporary: should it prove expedient for the state to curtail your rights, it will. People who lived in the cordoned streets had to show residence cards to enter the area (but then who doesn’t like being interrogated by police in order to get home?) The rest of us were barred. 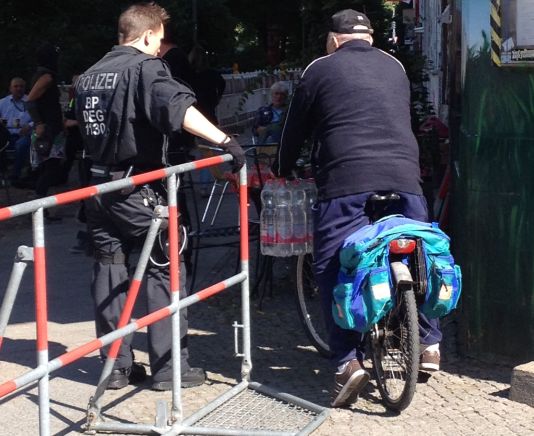 It was also a reminder that the fate of the refugees was being decided high up the political foodchain, rather than by the neighbours of the school and the residents of Kreuzberg. The sheer number of police – row after row of police vans, public squares nearby filled with officers ready to respond to a radio call and swing into action – explained clearly that this was not an ordinary crime or disturbance, but an expression of political will.

Over the next few days the number of protestors fluctuated, growing for demonstrations, ebbing when the weather was bad or energy low. But the momentum of the movement grew, as it organised, and the corner of Ohlauerstr and Reichenbergstr became the base for food, passionate speeches through a PA and readings of demands from the refugees in the school; later, concerts and performances. “Inform yourselves, ignore the media lies!” exhorted one of the speakers – referencing the fact the situation had received relatively little media attention. The Twitter handle Ohlauer Infopoint became the official news feed for the protest; and Twitter users were encouraged to include an exact time in tweets describing what was happening, so that a clearer picture would build.

Then on the eighth day of the stalemate – Tuesday, July 1 – police received a political notice from a Kreuzberg councillor, instructing them to evict those remaining in the school. The situation quickly became tense as news spread, the number of protestors outside the cordon growing, the microphone speeches becoming more impassioned. The police announced on their Twitter feed that they would negotiate with the refugees rather than use force, but at the same time the number of police in the area swelled quickly. The main road, Wienerstr, became a parking space for a convoy of their green vans. 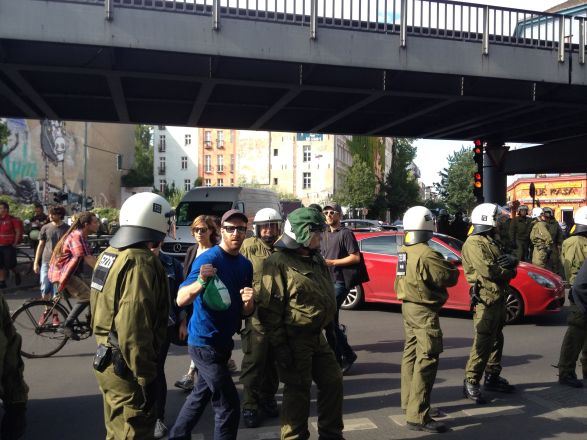 Each corner of the nearby major intersection under the Görlitzer bahnhof (metro station) was filled  with the police in their green uniforms and Magneto-riot helmets. Walking down Wiener Straße towards the cordon I saw a riot squad emerge from a Spätkauf, perhaps trying to make an arrest; a few of the hardcore-left types began to push the police, and there was the glimmering of a showdown, until the police scurried back to the main intersection. The appearance of the more seasoned left radicals on the scene suggested things could be headed towards violence. 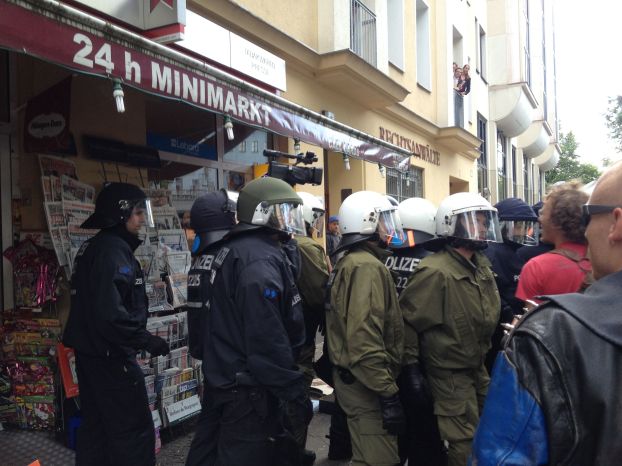 Kreuzberg has a long and proud history of violent protests, including the infamous May 1 demonstrations. As a Berliner I chatted with at Ohlauerstr explained, over the years the police had become hardened against the protesters, themselves becoming agents for violence. In years gone by he had seen officers baton down cyclists as they approached a police line, wanting to return to their home, or strike out at women not involved in a protest, motivated by revenge. As he explained, when a major police operation takes place in Berlin, police are also brought in from further afield, from cities such as Hamburg or Munich. These officers bring with them a vicious streak; in the German police force, officers receive a black mark when they are known for using excessive force, and it is these superstars of violence who are brought in, relishing the oppportunity to clash with the left wing radicals.

Yet the day ended without the refugees being cleared from the school. And while there were a number of arrests, with pepperspray used and injuries among the protestors, it was nothing exceptional in terms of the suburb’s riotous history. It was clear however that, if the tensions and the number of protesters continued to grow, there would certainly be a riot. Action was needed – either a political backdown, or the police would have to try to clear the school, perhaps late at night or in the early morning.

The following day was calm, though the sense of brinkmanship had concentrated media attention. Al Jazeera was filming, announced Ohlauer Infopoint, and there was a noticably a larger media presence, filming and photographing, than in the past days. Sadly for their producers, the dramatic confrontations had taken place the previous day.

And then it was announced that the asylum seekers had signed an agreement, allowing them to stay in the school, for construction to begin on improving facilities, and for the situation inside to be controlled by a police-approved private security firm. The eviction order was rescinded. Crucially though, those in the building were not granted residency – their key demand – and said that they signed the agreement tired and under pressure after days of a stressful siege. 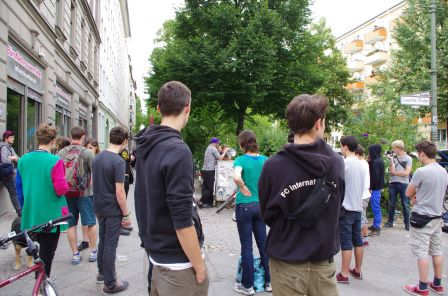 The result was read outside the cordons by protest organisers through a loudspeaker, the police as attendant to the news as the protestors. At 21:30 the police removed the cordons, and people spilled onto Ohlauerstr, a street they had been barred from for over a week. The mood was celebratory; people let off fireworks and talked animatedly. But still the school was surrounded by police, with a number of vans at the entrance, and officers placed every metre outside its high fence. Protestors with a loud hailer were urging people in the crowd to push into the school, but the sense was that enough had been achieved that day – the call received some cheers, but the crowd was relaxed. The latest news is that the asylum seekers will be free to come and go.

What happens from here remains to be seen. Germany has a complex set of rules for asylum seekers. There are restrictions on how long they have to wait before they can find work; they are required to remain within the municipal area where their asigned accomodation is located, and they don’t have freedom of movement within Germany (though often freedom of movement with the federal state is allowed). Critics point out that this is in violation of Article 13 of the Universal Declaration of Human Rights (hence the protest slogan: “We are here, we will fight. Freedom of movement is everybody’s right”). EU states are also signatory to the Dublin Regulation, which states that asylum seekers must be processed in the EU country where they first step foot. For Germany, surrounded by EU member states, it means that it is relatively easy to deport asylum seekers – some who only learn that they are to be deported on the day of their deportation.

In 2012, frustration with the situation led to a Germany-wide refugee protest movement, the Refugee Bus Tour, which visited camps informing them of the movement. It then travelled to Berlin, occupying a small park in Kreuzberg, close to Gerhart-Hauptmann Schule, on arrival. One of the human rights activists involved, Napuli Paul Langa, described the situation in the camps in an interview with the magazine Global Activism.

“One has to understand that here our lives are not normal; we cannot function like normal human beings. In the Lagers [camps], the authorities wield total control; our rooms are subjected to daily searches, every morning at 6am; the authorities have keys to our rooms and can enter whenever they please. We are not allowed to work or to send our children to school; we are supposed to only eat and sleep, like animals. The Lagers are fraught with fighting, mainly because of overwhelming frustration.

The desired outcome is for those in the school (and others) to be granted residency, allowable under Section 23 of Germany’s Residence Act, which allows residency to be granted on humanitarian grounds. It’s likely that protest actions will continue until this is achieved.

At the start of the actions I was somewhat ambivalent about the asylum seekers’ case – certainly there are a lot of refugees in the world with genuine need for asylum, and you’d expect the German government to be able to process their applications fairly, deciding in favour of those who had the greatest need, from homelands where the situations are most dire. So plays the argument. But through the course of the action, and seeing how the political decision-making was played out on the ground – enforced by huge numbers of police in riot gear, with batons and occasionally guns – it’s clear that this isn’t democracy in action. There has been nothing consultative about the measures taken.

One of the generic arguments trotted out against allowing asylum seekers to stay is the economic cost. But with the police operation reported by the German media as having cost €5 million, it’s a pretty weak argument. It certainly would have been cheaper to grant all 200 people inside the school residency. Clearly, when it’s politically expedient, money can be made available.

The other generic argument is that, if this group is allowed residence, then more will come – an argument purely predicated upon an fear of foreignness. It also seems particularly absurd coming after a week in which Kreuzberg was invaded by hundreds of unwanted police officers. You have to ask: What is it that is really unwanted in modern democracy: asylum seekers, or the pernicious politics of fear?

*This piece was originally published July 3, 2014 on  www.fashionandwarfare.com.

Stian Overdahl grew up in Auckland, New Zealand, and has lived in Norway, Dubai, and Berlin. He studied philosophy, and works as a freelance writer and photographer. He blogs at www.fashionandwarfare.com.