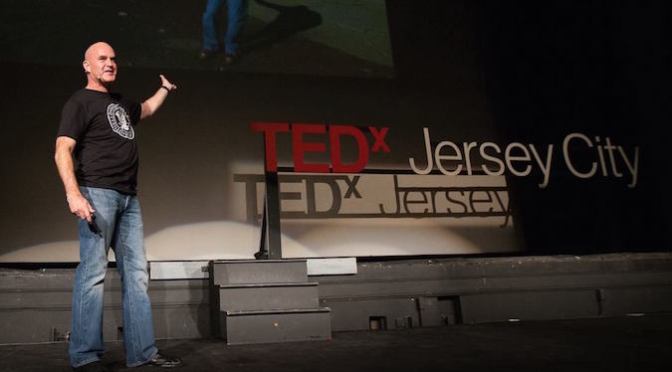 Angus Vail had his start in the music industry in the 80s, as business manager for Australian legends INXS. Having picked up that same baton with KISS in 1995, he continues to lead the rock behemoths’ business office. Following on from last week’s interview about his new project, the Container Globe, here’s a bonus Q&A where Angus elaborates on his music background, and the many changes he’s seen the industry survive.

How did you end up working in the music business?
I worked at the Bank of New Zealand in London in the 80s, then they transferred me to Sydney, and I realised that I didn’t really want to be a banker. I loved music so much, and I sent my résumé to everybody in the Australian music business. Everybody.

The guy that ran the business office for INXS, he basically wanted to leave because he couldn’t deal with the insanity of that band. It was 1988, I was 25 or something, and when I met them they were all a bit older than me. Kick had just come out, and they were like, you look alright. So I started off with them.

Started at the bottom, yeah?
Well that’s the thing, I was really lucky because I never started with baby bands, I started with INXS. Then they went and sold 13 million records, we did these huge tours and I had no fucking idea.

“I loved music so much, and I sent my résumé to everybody in the Australian music business. Everybody.”

We were all really young, and it was kind of crazy. I worked for INXS for five years. They started to go down, then – when INXS used to tour in America, they used this firm in New York, who did all their American tax returns and stuff. I knew them really well.

They said, if you ever come to New York we’ll give you a job. And they did. I worked for them for a couple of years, then basically their firm imploded. The younger guys in the firm all had this huge fight, and they tore the firm apart.

Then I saw an ad in The New York Times for this band that needed a business manager, and it turned out to be KISS.

At what stage in KISS’ career would that have been?
I started with KISS in 95. They’d been huge in the 70s, pretty big in the 80s, 90s – not so big but they were still selling records. They were keeping on and on with their general fanbase. Then they did the MTV Unplugged thing, which was huge, and we did five shows at Madison Square Gardens.

Then they brought the whole original band back together, and it’s just gone on from there. I thought I’d work with them for five years, max. But it’s 2018 and now we even do KISS cruises. It’s huge.

Luck and hard work –
It’s one of those things where you put yourself in the position of being lucky, I think. I never had to start with a baby band. I started with the biggest band in Australia from day one. The nice thing about that is, when you start with a big band you have people around you that are professional, they’re not muppets.

I started with people that would show me what to do – and I worked. That first year with INXS I didn’t get any sleep. I would sit on the floor in my office and just balk at all the contracts. The first year was hard.

You’ve been working in entertainment a long time – things have changed a lot. Can you talk a bit about what you’ve seen shift? Where do you think things are heading at the moment, in terms of the music model?
It changes so fast. In the old days you’d be able to just sell zillions of CDs –

What’s a CD?
Exactly. The funny thing was, in the 80s everybody was replacing their vinyl with CDs, because everybody thought CDs were better. Record sales were out of control. And the mark-up on the CDs was so much – Kick, that record just sold and sold. And you’ve got all the airplay, there was terrestrial radio, no streaming.

“I never had to start with a baby band. I started with the biggest band in Australia from day one.”

INXS had six singles on that album. The money that would come in from the publishing was huge, just from radio stations, and college radio – the college circuit was huge in the 80s, and they loved INXS, and they loved Midnight Oil, and Crowded House. So you had this great thing to plug into for touring, and just making loads of money from radio and selling CDs.

Then Napster comes along, it’s a bit grungy to use but people are starting to do it. People are burning their CDs, so money from CDs goes away. Streaming starts a little bit. Fuck-all money in streaming. But it means some bands will get a shot where they would have usually had to go through the record companies first. That sort of changed it, to be much more democratic.

The music business used to have a bell curve, now the bell curve is a lot flatter.  More bands can get a shot at getting their music out there, on Bandcamp and all those sort of platforms, but everybody’s doing it. There’s 9,000 punk rock bands on Bandcamp, which ones do you listen to? Then you’ve got Spotify, and does that model work? Well it does for some, because they get enough plays.

50,000 bands are making $1,000 a year – it’s democratised it to a point, but it’s also flattened everything out so.. where’s it going? I don’t know. I don’t think anybody knows. Does the streaming model work? What happens when all the legacy bands – the KISSes, U2s – what happens when all these bands go away?

Who are the next ones like that, that’ll have those huge careers, forever? I’m not sure that they’re there. Those bands that have grown massive on terrestrial radio – Bruno Mars? I guess, maybe. Kendrick Lamar? I don’t think so. Who are the super bands?

So, maybe it’s democratised everything and now it’s just this big blah world out there.

Or perhaps that shared experience is being concentrated in, or limited to smaller communities –
Yeah, but then it’s dispersed. Who’s going to be the next stadium band? Lady Gaga, I guess. I was talking to this kid recently, and he was saying that he doesn’t really go to see bands that much. He just picks and chooses singles, and he said, I don’t really have any great allegiance to any particular bands.

“I worshipped these bands and they literally defined my character. You don’t find that quite so much [now].”

I was like, that’s kinda sad. For me, the Sex Pistols changed my life. The Clash changed my life. The Ramones. All those bands – you followed them. I went to England in 1982 for six months and took trains around England and saw all these amazing bands from one end of England to the other, and Ireland.

I worshipped these bands and they literally defined my character. That whole thing of that lifestyle, attitude, fashion – everything. Worldview. You don’t find that quite so much now, the people that love, love, love, love bands.

I think you’re right, there’s a lot of grazing that happens, but that fanatical commitment definitely doesn’t seem to be there as much.
And I’m not sure that’s a good thing. Maybe it’s just that I’ve seen so many, but it’s hard to find bands that have that purity. A lot of bands I see now rock out, but it’s all very studied and they’ve all got a certain Brooklyn look.

Bands would practice and get tight and get their pacing down, get the songs down and experiment with them in front of live audiences. Now you get these bands that come out and they can’t play. They have no sense of timing, no sense of stage presence, and they just stand there like twats.

They’ve got ok songs, ok videos, they have a presence, but they suck live. They haven’t played in a pub and had people throw bottles at them and stuff. INXS played and they were really amazing live, because they’d played 20,000 hours, because they’d been playing since they were teenagers.

That whole thing of seeing how a song works in public, in front of the audience when you’re the support band, and everybody hates you? That is invaluable. Bands just don’t do that anymore. There are so many bands that don’t put in those hard yards.

Well, in Manchester at least, the musicians I know all play a lot and are in about five bands each, but there’s also an issue of access – you might be really well known locally, but how do you break through to that next level? Like you say, the industry has been democratised in a lot of ways, but because there’s so many people in the mix now, it’s that much harder to break through to become a bigger band.
Yeah. In the old days you’d have to go and get a record deal and sell your soul, and now you don’t. But the good thing is, if you work hard and keep working and playing, you still have a decent shot. A lot of bands get some attention out there with little effort. I’m just bitter and twisted.

Well you’ve seen so many massive shows Angus – you’re lucky! You got to do it at the cool time!
Oh yeah, I was lucky. I went to Belfast to see Stiff Little Fingers, and I’d go down to see The Jam in Pool and John Cooper Clarke in Manchester, I went to the Factory. It was great. Wandered past a record store and Siouxsie and the Banshees were in there, and I went and saw them a couple of times in Manchester. Two of the best shows I ever saw in my life.

Sarah Illingworth is Editor at Impolitikal, and a Communications Manager with the Open University’s Learning and Teaching Innovation portfolio. She has an MSc in Poverty and Development from the University of Manchester. Read more by Sarah.