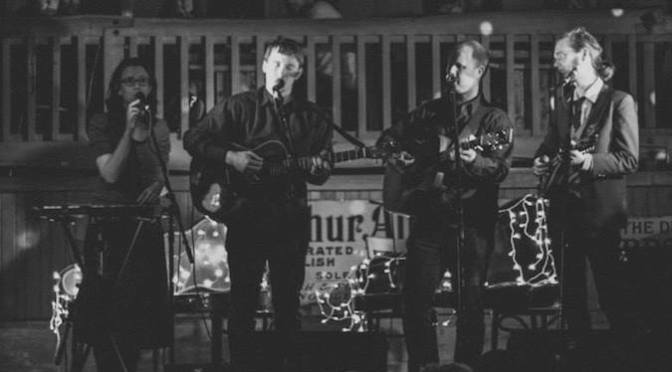 About to complete a 20-date European tour, Great North – at its core wife-husband duo Rachel and Hayden Donnell – play folk with a self-confessed smack of Americana and dad rock. Having recently traded the streets of uptown Auckland for those of Stoke Newington, the two-time winners of NZ’s Folk Album of the Year award decided it was time to do something “ill-advised”, and traded the dream of high-end furniture for more memories in the bank.

The band’s latest album The Golden Age is in many ways an homage to their musical padre Sam Prebble, a loved figure in New Zealand’s music community, and a talented artist in his own right. Sam committed suicide in 2014 and his absence is deeply felt. Here Hayden reflects to Sarah on losing his friend and collaborator, and the wry power of falling forward.

You’ve just released your third album, The Golden Age. What are some of the shifts you identify, in both style and story, since your last release?
I’ve been running my mouth all over town about how we haven’t made a folk album this time, and as always I’m coming to regret my rash words. I’ll revise them. Though we haven’t made a folk album, we’ve definitely made a folk-rock album, which I note still has “folk” in the title, and is ergo by definition closely related to “folk”.

The whole writing process started with me not knowing how or what to write. My beautiful sweet-natured pedal steel player Matthew Hutching – who has always been a dad despite his lack of babies – showed me this terrible, cheesy, recording by John Hiatt called Stolen Moments. To my eternal shame, I absolutely loved it. It played out of the car stereo while I danced on the footpath on Pitt Street in Auckland.

That sense of fun really inspired our shift in style on The Golden Age. It’s really influenced by a lot of 80s folk-rock, and let’s face it, dad rock, from artists like Tom Petty, Jackson Browne, Bruce Springsteen, and of course Mr Hiatt, as well as some of the more up-tempo country-rock songs of artists like Lucinda Williams, and even Gillian Welch.

You’ve said that, though this album is inspired by failure, it’s your most optimistic to date. What failures are you referencing, and what inspires that hope?
I mean that, in lots of literal ways, the album really is birthed from failure. It’s our fourth album, and we’re at best a mid-level band. Many of the lyrics are about people who never really struck the big time, whether it’s us or our friends.

“There’s this real joyous alchemy that happens right at the intersection of despair and hope. A lot of the most beautiful art is sung in the voice of failure.”

So why is it optimistic? I think partly the music just sounds more optimistic. There are cheesy electric guitars and stuff. But I think that style echoes the overall feel of the album. It’s meant to be kind of defiant. I think there’s this real joyous alchemy that happens right at the intersection of despair and hope. A lot of the most beautiful art is sung in the voice of failure.

That’s almost a religious thing. Obviously Christianity as it stands is often a terrible mix of nationalism and moral tyranny, but it still started with this quite beautiful idea that the last will be first. The meek will inherit the Earth. The loser bands will receive justice, in this life or the next. It’s an idea that’s been riffed on and plagarised for centuries, and one I’ve taken a kind of flailing, and extremely personalised, swing at in this album, whether directly on a song like ‘Some Kind of Redemption’ where I sing a big dramatic line like “I’ll be with you when the mansions are all burning”, or just in describing the glorious failure of another $10 show playing for the other bands in a song like ‘Wasted So Much Time’ or ‘Waiting For The Pentecost’.

You lost your good friend and collaborator Sam Prebble in 2014. How did he die, and what has been the impact of his passing on you personally, and your wider music and friend community?
Sam committed suicide. It’s something too many people do, and too many musicians in particular. I don’t know why. I don’t even know whether he was depressed. I know he was messaging me a few weeks before his death about putting on a show together in a couple of months’ time. At first that seems baffling. But I think we often think of human minds as having a single narrative, where Point A leads directly to Point B. The way I think now is that we’re more like a song, with melodies and counter-melodies happening at once to form something like a coherent whole. Maybe a discordant melody just got too strong at one point in Sam’s song. Hopefully that doesn’t sound too poetic or trite.

“We often think of human minds as having a single narrative, [but] we’re more like a song, with melodies and counter-melodies happening at once to form something like a coherent whole.”

Anyway, other people were closer to him than me. It was absolutely devastating for a lot of them, and I don’t want to put words in their mouths. But I know traces of Sam remain in the work and words of his partner Emily, and the songs of bands like The Broken Heartbreakers and Reb Fountain – who just released the last album Sam ever worked on, Little Arrows.

I still think about him a lot, and I feel this almost exasperation or annoyance that he’s not around. It just sucks. It always sucks. There’s not much more to say. But I guess, when it happened, his loss really crystallised a couple of things I was exploring on the album: this longing for the disappearing past, and the idea that there’s real beauty in apparent futility and failure. He was gone and we wanted him back, and yet even though nothing ended right, it was still worth singing about.

What are some of your best memories of Sam?
I have a lot of good memories of Sam, but I think the way most people remember him is as almost as a force of nature. He had a way of changing a room with his presence – this skeletal, behatted, walking-talking parody of a broke musician. Sam had a way of making shockingly bleak jokes that would somehow make you feel more optimistic. He was never successful in his career either, but he failed upwards. He failed stoically and inspiringly, like an Antarctic explorer.

Having said that, there is one memory I keep coming back to in the songs – particularly ‘The Late Bus Home’. It was of this show we played a few years back at Leigh Sawmill Cafe. Sam played fiddle and mandolin, and as usual refused to stop singing harmonies even on songs where he didn’t know the words. Afterwards we got incredibly drunk on the boat they have marooned in the yard outside the cafe, and sang songs together terribly until I lost my voice. It was extremely messy and ill-advised, and also kind of beautiful in a way, which I hope fits well with our album.

What are your favourite examples of his work?
Sam’s best work overall is probably his last album, The Explorer’s Club. It’s a concept album that tracks the journeys of the Antarctic explorers Robert Falcon Scott and Ernest Shackleton. It’s just such a great theme for an album.

Who are some of the other people you worked with on The Golden Age?
The most important person we worked with was producer Jonathan Pearce – an annoyingly talented, long-haired weirdo who also plays guitar for The Beths and produces for Anthonie Tonnon. He really created the sound for the album with both his playing on organ and electric guitar, and his production. We also worked with the incredible drummer Alex Freer, who plays in Tiny Ruins and regularly trolls me on the internet.

Elizabeth Stokes, who sings in The Beths and sometimes comments on my Instagram, played all the brass. Proper professional musician Eamon Edmundson-Wells was on the bass. For a few of the songs we also gathered a choir of musicians who used to work closely with Sam – Dylan Storey, Reb Fountain, and Brendan and Alison Turner – and paid them in pizza.

Besides that we had members of our traditional Great North crew. My wife Rachel on backing vocals and bass. Dale Campbell on backing vocals, Matthew Hutching on pedal steel, and me on singing and a few instruments.

Why did you decide to relocate to the UK from Auckland, and how has the move affected the band’s path? Are you working on music full time?
Mainly because we were getting older and hadn’t done something extremely irresponsible and ill-advised. I’m really not sure how it’s affected the band’s path, but it’s meant we’ve been able to have a lot of experiences we couldn’t have if we were living in New Zealand: touring Europe twice, living in Stoke Newington in a flat with broken plumbing, learning the correct response to the greeting “y’right?” Unless reincarnation is real, you only live once, and you may as well not waste your entire life trying to earn enough money to buy fancy furniture. Chairs are overrated.

We’re still not working on music full-time, but we’re working on it much more of the time.

You’re currently on tour in Europe and the UK, how’s it been going so far? Any good stories?
It’s been shockingly good. European audiences have this ideal mix of attentiveness and generosity. They keep this potentially financially disastrous enterprise solvent. But the hosts are still the best part of tour. There are dozens of nutbags who put you up in their houses, and do things like pay for you to drink litres of beer at Oktoberfest, or serve you an extensive range of fancy teas.

Also, every so often, you get to play a show at an amazing place, like a disused abattoir under a market in Brussels, or in basement filled with cigarette and malfunctioning-smoke-machine smoke under a five-storey flat in Winterthur.

Any new artists you recommend looking up?
Not really new but these are some I’ve been listening to lately: Hiss Golden Messenger, Anthonie Tonnon, French For Rabbits, Reb Fountain, Bonnie Raitt, The Felice Brothers, and a little-known artist called Bruce Springsteen.

Great North’s 3rd album The Golden Age is out now. Get it via Bandcamp.