When Helen Clark ran for the post of UN Secretary-General in 2016, Gaylene Preston was by her side. The New Zealand filmmaker, who initially contacted Helen about documenting her life as the then-head of the UNDP, proved to have picked the perfect moment. NZ’s first elected woman Prime Minister was soon to announce her bid for the top role. My Year with Helen became an intriguing record of Helen’s campaign, executed while she continued to fulfil her UNDP duties.

Sarah checked in with Gaylene ahead of the film’s London screening on November 28.

How did you and Helen first meet, and what was your impression of her at that time?
I can’t remember when I first met Helen. She says everyone in NZ knows her, and knows me, so we thought we knew one another. That’s about right. I think I went to a meeting with her over film funding when she was first in Parliament, but the point is, once you have met Helen, she is unlikely to forget you or your name.

What motivated you to make a film about her, during the year she ran for UN Secretary-General?
I was wondering why, in a world that seemed to be getting more and more hopeless, Helen had renewed her contract at the UN – a much maligned organisation. She is not one for just smiling and waving, and I wanted to know what was fuelling her optimism.

I joined her for a film shoot on a UNDP country visit to Botswana, and it was while I was there I realised she was probably going to be throwing her hat in the ring to be considered for the top job. That was the hook I needed to base a feature length film around.

Tracking someone for a year is no small task. What did the project require, and what was the experience like for you?
The process was demanding and I was lucky to have the services of Catherine Madigan as my co-producer, because Catherine had already worked with the UN in East Timor and is also an extremely experienced international line producer based in NZ.

“Once you have met Helen, she is unlikely to forget you or your name.”

We had a base in New York where we would live for a few weeks as we shot what we could. We would then return to NZ, where I worked with an editor to compile the material to get a handle on how it was looking, before we set out again. I travelled to Madrid and the UK and we went to Washington a couple of times, but we were generally around the UN in New York. It was taxing and frustrating because of all the security and secrecy, but we got there because we filmed over the year.

What are some things you learnt about Helen, and the work she was doing as head of the UNDP, along the way?
Helen is very systematic and organised. She is also accessible to her staff and believes in transparency. The UNDP was not an office full of intrigue. There isn’t a second, private Helen that is very different from her public persona. Helen is firm but kind. In our film, what you see is what you get.

What insights did you gain into how the UN operates, and global politics generally speaking?
The UN is full of intrigue. It’s an audacious idea if you think about it. 193 member states – and all of them with rotating governments – dedicated to stopping wars by talking. It can only be as good as its’ member states want it to be. The Security Council sits in the middle of the organisation – 10 states on a two-year rotate, and five permanent members with a veto.

That’s the problem. The veto. And the chances of removing it are impossible, because any move for change in that direction would of course be vetoed. Global politics are the ever-changing minefield one would expect them to be. The Development arm that Helen led is the most successful idea, because it can prevent wars before they erupt.

How did you begin working as a documentary-maker, and what have been some of your other projects?
I would probably have been a public service documentary-maker if I had lived in a country with a public service television network. But I didn’t. So I became a feature filmmaker – my first doc was screened as a short in NZ cinemas before a NZ feature film. I liked the way the audience is focussed in the cinema, so I stuck with that. 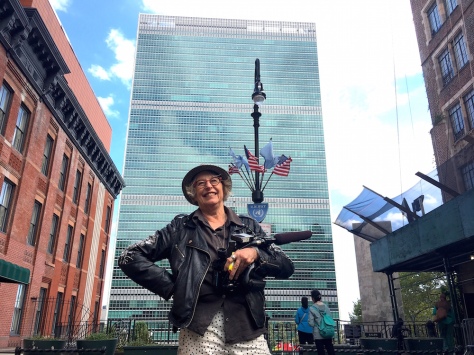 I don’t know exactly how I did it – each film is different – but if you check out my films on my website, you will find feature docs, dramatic features; comedy and thrillers, TV series and TV documentaries. They are basically feminist films – some are metaphorical fantasy, others are realist feminist history, others are documentary portraits of NZ artists I admire.

Overcoming gender-related barriers has been a clear theme of Helen’s story – not just regarding the UN bid, but throughout her career as a politician and leader. Why do you think we are still so culturally predisposed to promote men to positions of power over women, and what do you think it would take to shift that paradigm?
The idea of women leading is something we don’t trust and don’t easily vote for, but once they are leaders we generally appreciate their strengths – this is discussed fully in My Year with Helen. There’s an old boy network that prevails. Avuncular men are greatly liked. That quality in women leaders can be seen as untrustworthy. Flirty. Soft.

Do you think your experience of being a filmmaker has been more challenging because of your gender?
I have no idea because I have always been a woman filmmaker, so I don’t know how my films would be received if I had been called George. There is no doubt that there are barriers. Someone described it as being a filmmaker with a club foot.

“Avuncular men are greatly liked. That quality in women leaders can be seen as untrustworthy. Flirty. Soft.”

Though there is plenty of gender bias in NZ, we do live in a place where doors have been bashed open. Helen Clark’s nine-year Prime Ministership of a minority government being one very good example. We now have Jacinda Ardern doing similar at a younger age.

What is your advice to up-and-coming female, and other minority filmmakers, in terms of how they can break through barriers to opportunities to make and share their work? Filmmaking is so competitive, but we need to hear a wide range of stories!
Just do it, no matter what it takes. “No-one will roll out a red carpet for you. You’ve got to knock those doors down,” Helen Clark in My Year with Helen.

Gaylene Preston is a NZ-based filmmaker. Get tickets for the London screening of My Year with Helen on November 28.