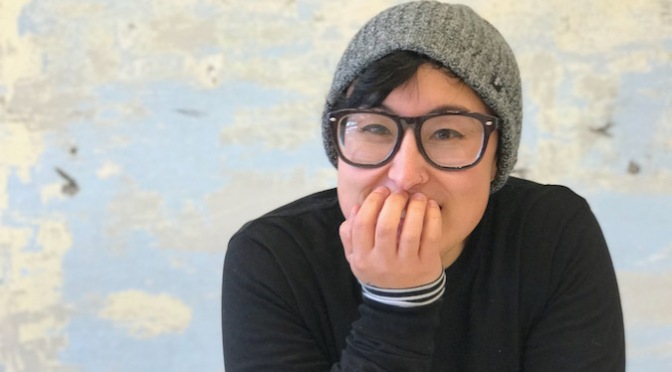 Leah Garcia-Purves is a technical writer and chef from Auckland, New Zealand. Filipino-Kiwi, her years spent working in the hospitality industry have led her to experience and witness racism and sexism in kitchens on a regular basis, and she wants to see an end to the notion that cheffing and commercial kitchens are a straight white male’s domain. She talks to Sarah about her experience, and why it’s time for the industry to change.

Despite stereotypes about women ‘belonging in the kitchen’, cheffing has become a largely hetero-cis domain. What are your feelings around this?
Mixed. I’m a bit of a purist, so personally I recognise the trend based on history and practicality. However in a world where we need more equality and progressive attitudes towards trades, I hate these stereotypes.

From a very holistic, primal caveman level of origin, men usually did the hunting and then prepared the meat while women raised children. This has somehow translated over centuries and constructs as men doing “heavy work” and in turn, cooking for masses turned into a man’s field. Hence, domesticity is generally separated by gender, which is also a bit crap. Jean Anthelme Brillat-Savarin, who many call the pioneer of culinary studies, made light of the fact that cooking and gastronomy wasn’t just about the science behind the senses, but in practice it was about romancing women.

“It’s just that little bit harder to, quite frankly, overtake male egos in the industry.”

The level of sexism involved in the birth of the European study of gastronomy has evolved and applied itself in modern commercial kitchen dynamics. This general unspoken mantra of condescension toward women being “catered to” is still very much upheld in just about every industry, none more so than in hospitality. It’s a construct that’s outdated, definitely. There is a separation between a domestic and commercial kitchen, but it shouldn’t limit which genders are permitted to work in either one.

How would you like to see things change?
Lasting change starts with people seeing the benefits of having more diversity, no matter what audience you’re catering to – whether that’s fine dining, gastropubs etcetera. There really is an uneven skew of men running popular eateries. It’s not because other genders don’t want those jobs – it’s just that it’s just that little bit harder to, quite frankly, overtake male egos in the industry. There has always been an overcelebration of white male chefs and that reasserts the notion that they’re the only ones breaking new ground culinarily. Quite frankly, they’re not. Far from it.

The reality is, owners and managers want to look after their bottom line but ultimately, any discriminatory practices get brought out in the wash.

Can you describe any situations where you’ve been discriminated against in the kitchen?
It’s hard to really pinpoint the worst of the discrimination – I actually have a bit of a tough skin, so a good portion of it flies over my head. It’s not so much blatant racism as it is sexism these days. There is banter and there is bullying. In a previous job, I was quizzed about my sexuality by both the executive chef and the restaurant manager. My sexuality is something I’m proud of, but my personal life isn’t just anyone’s domain to get their jollies off on, and not at all relevant to my work performance.

“It’s not so much blatant racism as it is sexism these days. There is banter and there is bullying.”

I eventually stood up for myself and I was fired the next day – 3 weeks short of my 90 days – after which point I could’ve legitimately taken out a grievance. The same place would import their kitchenhands from China, pay for their visas and would house them but pay them substandard wage and roster them for ridiculous hours.

At another job, where I was responsible for hiring, I had to tell a new hire what we could pay him, which was more than what I was earning, and not at all based on comparative experience or qualifications or position. In both situations, I talked to a union rep and their hands were tied. In fact, in the unequal pay situation, my union rep told me it was none of my business what they decided to pay him.

You’ve identified a disconnect between the obsession with using ‘ethical’ products, and a lack of ethical attitudes in the workplace in the Auckland hospitality scene. What have you experienced in this regard, and how has it made you feel?
If having guilt-free products and ethical produce weren’t a big marketing chip and an edge on competitors, then I guarantee that a good portion of businesses wouldn’t bother. It’s all bottom line and not a free conscience that they’re after. Businesses need easy, marketable substance to cohabit with an active social media presence, often reinforced by relevant influencers for pay or contra, a.k.a. freebies in return for services.

From a consumer perspective, it’s easy to look at a place’s Instagram and assume: their tomatoes are grown at a place down the road – they must treat their staff well! Labelling a menu as “made from ethically and locally sourced ingredients” is a marketable catchall – it’s an easy sell along with pretty pictures. What people don’t realise, or don’t care about, is that the restaurant might be enabling questionable labour practices, not just from a remuneration perspective, but also from a general practices and attitude perspective. Nobody asks the questions of how dynamics are in kitchens, for example what really drives their money to one supplier and not another.

“It’s easy to look at a place’s Instagram and assume: their tomatoes are grown at a place down the road – they must treat their staff well!”

I’ve trialled and worked at some places that have made bold statements about their ethically and locally sourced produce, and then you see the kitchen staff yelling at their younger members without any justifiable reason. At one of the worst places, staff would bring in fruit from their backyards and weren’t compensated for their home produce.

The restaurant manager would also often pick on his female waitstaff. It was just an insane mish-mash of saving face that wasn’t consistent with how the public viewed them – a family owned, down-to-earth establishment that contributed positively to the community. Another place I had a short stint at runs market days which celebrate local suppliers, but past and present managers would single out female staff regularly and had a real reputation for it.

From a manager’s perspective, I’ve dealt with sales reps and managers whose companies make artisan products and they would tend to treat me with some contempt because I was younger or a woman. It’s not unique to this industry, but it sure is more pronounced than in others. For an industry that is so bent on keeping clean reputations, a lot of people think they’re immune to any criticism.

Can you identify any other barriers to equality in the hospitality industry?
At the legislative level, if the current government continue to limit work visas for certain categories of immigrants, we’re going to see a real lack of not only general labour, but also ethnic diversity in the industry. We need this diversity to enrich not just our workplaces, but our world views on food and culture on a wider scale every day.

“We need diversity to enrich not just our workplaces, but our world views on food and culture on a wider scale every day.”

In terms of seeing more chefs of other genders in the industry, we need to really celebrate culinary talent equally. Not just in industry awards, but in publications, in seeing more genders head up great eateries as the norm, not the exception. Commercial kitchens can be an amazing space to work in. At their best, good kitchens have a real sense of camaraderie, all driven by passion and pressure. But thanks to the spate of cooking shows and reality TV, all people are sold is that it is a mostly oppressive place to be headed by moody white men. This isn’t wrong, however it encourages the status quo to maintain itself without much opposition.

You’ve also worked in media and advertising. Can you draw any parallels between your experience in those industries and hospitality?
Both industries are extremely inconsistent in terms of image versus substance. I feel like this is almost mandatory for advertising and media, but less expected in hospitality, so people buy it. I really feel like the two industries are starting to be more codependent than ever before which is scary.

More than ever, it’s all about who you know and who you can haphazardly throw freebies to, not whether you’re making a good product and making it known effectively. The masses will buy whatever is thrown at them by personalities and “influencers” and that’s sad. The general public aren’t discerning enough to be critical of it.

Leah Garcia-Purves is a technical writer and chef based in Auckland, New Zealand. Find her online.