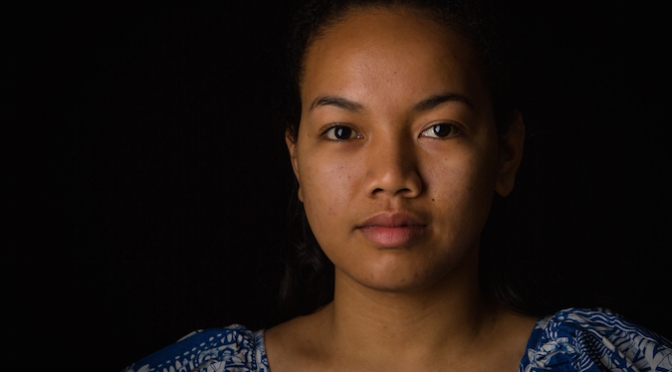 Protest is a hot topic in 2017, but at Impolitikal it is important to us to understand it beyond trend. We’re exploring the deep reasons that drive people to rally around important social and political issues, and highlighting those that do. Evelyn has interviewed several activists about their personal motivations for being involved in protest movements, and the methods they use. First up, Impolitikal contributor Selina Leem.

Selina Neirok Leem is a small island girl with big dreams from the Republic of the Marshall Islands. She graduated from UWC Robert Bosch College in May 2016. Selina has written for Impolitikal on the topics of climate change and violence against women.

What is your idea of protest?
Sadly, the first word that comes to my mind when I think of protest is violence. It shouldn’t be, but the movements that have been trending and catching the news media’s attention are the ones where protesters are either being attacked or they are the ones instigating violence. Lately it seems that it is mostly protesters being attacked. This is why whenever I think of protests, I think of violence. It goes to show how desperate we are and how desperate the other side is in shutting us down. It should not be like this.

A protest should be a stand against injustice. It should show a united front against an oppressive regime. A protest is the blood, sweat and tears of an individual whose forehead has been creased with the heaviness of this world. It is the small voices that have been compressed into a slogan or a small line written boldly on cardboards and charts pressed high up into the sky with the marching chants of thousands of thunderous warriors demanding to be heard and seen. A protest is a right. It is also on the many social or media platforms that we are using to stand for a cause, for the common good. It is a united front but it also shows a divided society. And that is what we should all combat.

Do you protest in support of a particular issue?
I have mostly been involved in advocacy around climate change and violence against women and children. Many protests start off personal, and mine is like that. It started because I have experienced both issues personally. Contained within me is great anger and deep sadness. However, it is not an anger that I can freely express. Because, in today’s society, I am called to be ‘civilised’. To be eloquent, understanding, be logical.

Read Kathy Jetnil-Kijiner on experiencing the effects of climate change.

Nobody likes to listen to a young woman yelling and screaming at the injustice the world has done to her and her people. So you find other ways to express this anger and sadness, this need to right this world. It merely becomes a different form of expression, an art. I use my voice, my presence, and my writing to protest. All my tools reek of emotion and are lethal. I am able to manipulate them so I mask this anger and sadness within me. They are my contribution in making change and bringing global justice.

For what purpose do you protest? To show solidarity?
For my home, the Marshall Islands, I protest so that it can still be on this planet. We are at the forefront of climate change and we see what is happening in our own backyards. It is not just us in the Marshall Islands – our Pacific sister nations and many other parts of this world are affected by climate change. Our joining this protest is a show of solidarity, of unity. We are no longer fighting for just ourselves and our existence. We are fighting for this world and its existence.

We have joined hands with others and are showing we are willing to cooperate to resist the destruction of this world by a small group of people who have amassed a great deal of power and influence. We want you to cooperate too.

What are some forms of protest that you think are effective?
There are many forms of protest. There is protesting in person and standing solid alongside those with similar views and passion as you. Or taking it to social media and sharing your views and opinions to incite conversations and critical thinking amongst those you follow and your followers. You can call out an unjust action. Or send or sign a letter being addressed to big corporations or political leaders. Write an article or give a speech. Write a song. Do slam poetry. These are all different and effective tools you can use to protest.

What organisations do you belong to? What are the main activities you have been involved with locally and internationally?
I am a member of Jo-Jikum. Jo-Jikum stands for Jodrikdrik in Jipan ene eo e Kutok Maroro (Youth for a Greener Environment), we are a non-profit youth and environmental organisation based in the Marshall Islands. For the past few summers, I have also worked as a peer instructor for science camps organised by the University of the South Pacific. In these science camps, we take in students from all the high schools in the Marshall Islands and teach them about things like recycling, climate change and coral bleaching.

I was one of these students too and this programme really helped me to understand more about environmental issues and improve my public speaking skills. Internationally, I have travelled to many countries to give speeches about climate change, perform spoken word poems, or just be a participant. I have written articles and been interviewed.

Selina Neirok Leem is a small island girl with big dreams from the Republic of the Marshall Islands. Read more by Selina.

Evelyn Marsters has a PhD in Development Studies from the University of Auckland (NZ) and is currently based in Berlin. Her focus is global health and migration, and she is Deputy Editor at Impolitikal. Read more by Evelyn.