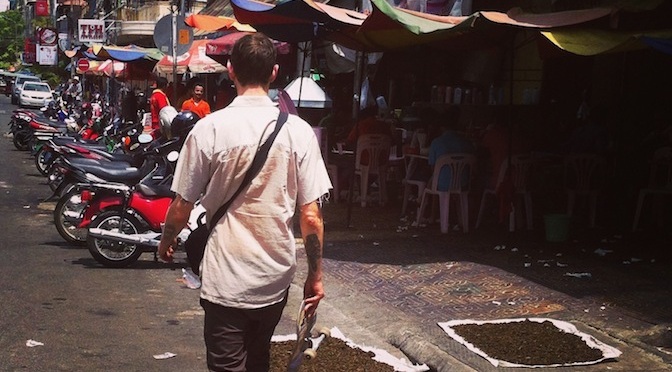 Skateistan is an NGO that works with children in war torn countries, teaching them to skate as a source of empowerment (and total joy), and educating them in the book sense too. Having opened shop in Kabul, Afghanistan in 2007, Skateistan now also run a full program in Cambodia. Bill Bycroft and Rachel Turner visited the latter in June and made a short documentary about their visit. We’ve posted the video below, but first up Bill answers a few questions about this very special organisation.

How did your connection with Skateistan come about?
I’ve been aware of Skateistan and what they do for several years. I first came across the Afghanistan program through a skateboard magazine. I always thought it was really cool that skateboarding could have a positive effect on kids in a war zone. A few years later I heard about the Cambodia program. When the opportunity came up for my wife Rachel and I to go to Cambodia, I thought if we’re going to visit the country we should at least try to visit Skateistan too. I got in touch with them through their website and explained that I’m a skateboarder and filmmaker, and wanted to produce a short documentary for them, to try and help raise awareness of what they do. It came together over email and the next thing we were in a tuk-tuk in Phnom Penh going to meet them!

How much time did you spend with them in Cambodia?
Because they have policies in place to minimise disruption to their classes and program, we were only allowed two hours during class time. We went and visited the day before the shoot so we could introduce ourselves to the staff and talk over how we wanted to approach the documentary. We got there when the classes had finished for the day and met all the staff, both local and international, who were really nice and friendly. Then I got to skate with Tin and Peakna and a few others in the park which was super fun. I think it helped to have the bond of skateboarding when we returned the next day to film the class and do the interviews. Tin and Peakna were comfortable with us and we just kept out of the way so they could take the class. After the class we did the interviews, which were really good. The staff are so passionate about what they do that we talked for ages with each of them, and they were natural in front of the camera. After that of course I skated the park again with them, which was awesome. We ended up having a great time and were there for almost five hours.

Were you involved with teaching the kids to skate?
Initially I asked if I could be involved with teaching skating during our visit, but they prefer not to do anything that might interrupt the daily running of the program, which I understand. It’s better for the students to have consistent teachers rather than various people trying to do things other ways. The core of the program is for underprivileged kids to access education through skateboarding, so there is an equal focus on education and art activities as there is on skateboarding.

Why do you think it’s important for Skateistan to be in Cambodia?
After visiting Cambodia and seeing the level of poverty that so much of the population live with, especially children, I feel Skateistan’s program is an exception. There is very little government support and education for underprivileged children, and it seems most of the schools are run by NGOs. The difference with Skateistan is that they have a unique attraction, skateboarding, which is a completely new activity there. Kids come to Skateistan to skate, they have access to skateboards, shoes, safety gear and a skatepark, and then they have access to art and education classes on-site as well. It really feels like they are fostering a community there.

Skateboarding is a great physical activity, and it helps the students to communicate and interact with each other, and build confidence and a feeling of self-worth. Tin and Pheakna are perfect examples of how empowering the program is for students. I personally think skateboarding is a great way to express yourself and let out tension, and gives a great sense of achievement even with small goals. The other important difference with Skateistan from many NGOs is that the end goal is one of self-sustainability. Like most NGOs they rely on foreign donations, but the majority of the staff are now local ex-students, and the idea is eventually for the organisation to be completely run by local staff. This aspect of community is integral to the operation.

What were your impressions of the country generally speaking?
Cambodia is an amazing country. The history, both ancient and contemporary, is fascinating and tragic and you can’t avoid either when you visit; there are obvious issues with poverty left by the Khmer Rouge regime but there is a great sense of generosity and hospitality with everyone you meet. The positivity and optimism that we experienced across the country was highlighted at Skateistan. A community of like-minded people, working together with kindness and appreciation.

Bill Bycroft is a skater and filmmaker. Find more of his work here. For more on Skateistan, go to www.skateistan.org.