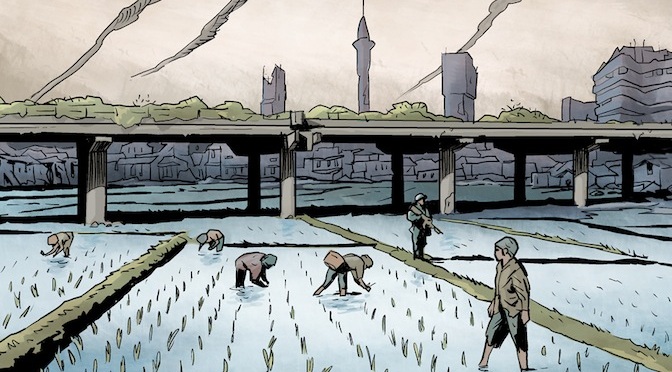 My father’s family live on a low-lying atoll in the Pacific Ocean, called Palmerston Island. It’s part of the Cook Islands and has, for the past 10 years, had a population that hovers around 40-50 people. The population has limited generated electricity to allow households to cook, and to provide power for the hospital and school. My relatives have in no way contributed to the rising seas, a result of climate change, which will one day more than likely obliterate the island. I fear the tide will take my family’s heritage, culture and distinct linguistic dialect with it.

At her Capital versus Climate lecture last month in Berlin, anti-globalisation journalist and activist Naomi Klein stated, “We are going to have to make sacrifices”. For her, these sacrifices include radical economic reform, and changes to our daily mode of life by consuming less – especially fossil fuels. While listening, I realised that a lot of the power to bring about radical change is in the hands of activists like Naomi, who can position themselves alongside, or effectively against those governments and corporations with the most power. She’s an important voice of our generation because she makes complex arguments easily accessible to a broad audience, in multiple languages. But it’s important to keep in mind that these audiences often share the same Western continental privilege; their homelands, people, languages and culture are likely to be able to adapt, and survive violent changes to the world’s climate.

As the momentum of climate change activism increases, voices from small island states need to be given the microphone. It is voices such as Kathy Jetnil-Kitijner, a poet from the Marshall Islands, that need to be heard by those that hold power. In her poem ‘Dear Matafele Peinem’ she calls for the world to take action, so that future generations can continue to live on small islands like the ones that are her home. During her lecture, Naomi Klein reiterated several times that climate change is the most important social issue of our time, because it “changes everything”. She’s right – the effects of climate change are unequal and affect those who have nothing left to sacrifice. I’d even go one step further, to say that climate change has changed everything.

If you use climate change as a lens to analyse resource use, power imbalance, the privileging of corporations over people, poverty, disease, population displacement and the strategies of governments and NGOs it can elucidate the synergistic and harmful interactions humans have with each other, and with the planet. We all have social justice issues which speak to our moral and ethical positions. If we look a little more deeply at these, and find the climate change connection, it becomes obvious that by working against climate change we are simultaneously working towards a more equal global society. This is highlighted by the range of creative responses seeking to persuade those sitting on the fence of the climate change debate.

Take High Water for example, a New Zealand-based group that aim to encourage artists and creative people to create work that discusses climate change. Notes one of the founders, Damon Keen: “Scientists have been trying to communicate the impacts of climate change for years, with limited success, so it can’t do any harm to let artists have a go. I think communicating the issue visually provides a really punchy way to get the message across.”

Damon also co-founded Faction Comics, who publish New Zealand’s first regular, crowd-funded, full colour comic anthology. In a meeting of the two groups, Faction’s next edition is titled High Water. Themed around climate change, it features the previously unpublished works of 11 New Zealand artists, including Sarah Laing (The Fall of Light), Dylan Horrocks (Hicksville, Sam Zabel and the Magic Pen) and Chris Slane (Nice Day for a War), with an introduction by Lucy Lawless (Xena, Battlestar Galactica, Spartacus). High Water is being launched in Auckland, New Zealand on April 16 at underwater venue Kelly Tarlton’s, with support from local creatives and climate change activists. I spoke to Damon about this new edition.

Who are Faction Comics?
Faction Comics is myself and Amie Maxwell. We set up Faction as a way of promoting New Zealand comics in our spare time. Our vision was to create a magazine with extremely high quality work inside, that was also designed and delivered to a high standard. We planned to demonstrate that there is a lot more to comics nowadays than superheroes, as well as reflecting the new diversity of both work and comic creators that has emerged in the past decade. Faction 1, 2 and 3 have all come out annually since 2012. Unlike High Water they aren’t themed around any particular topic, but are simply collections of work by the best NZ comic artists. This particular book is also part of High Water – which as well as being the name of the comic, is also the name of our group, which is myself and Lisa Waldner. The High Water group aim to encourage artists and creative people to produce work that discusses climate change.

Why a climate change edition?
Imagine if World War 3 started, and no one noticed? I think that’s what has happened with climate change. A catastrophic threat to our way of life is now well underway, and the public is sleepwalking through it. Our political systems have been hijacked by a breathtakingly selfish rich elite, and as a consequence we’ve spent 25 years doing nothing about it. I truly think we all have a responsibility now to step up and just inundate the public with this issue. High Water is part of our response to that. We don’t all have to be on the front lines, I think we should all just do what we can.  And I’m a cartoonist, so this is what I can do.

Which particular climate change issue really gets to you?
Arrgh! That’s such a hard question. Climate change is so big, and has so many potential consequences – it’s hard to answer that! On an abstract level, I think what upsets me a lot is that humans have so much potential. We’ve put humans on the moon, and made so much progress in the fields of feminism and human rights, not to mention in the arts and sciences – from music to gobsmacking insights into the nature of the universe. And it’s these rare attributes – the ones now so seldom celebrated in our neoliberal cu-de-sac – that strike me as the very best things about our species, in fact that give us any value relative to any other species.

It’s that spark that climate change threatens. Whether it’s the mounting pressures of a potential 150 million climate refugees, or the catastrophic collapse of our oceans, all the progress we’ve made as a species could be shrugged off or forgotten as our civilisation is pushed back into the dark ages. And losing that – the only thing that makes me proud to be a  human – that makes me sad. Not only what we’ve done, but what we could yet do.

On a personal level, it’s the children in my life. As someone relatively well-educated in this subject, I worry about what I’ll say to these guys in 20 years. How I will explain myself to them. I feel less and less that sitting on my hands is an option anymore.

Why do you think artists jumped on board to be a part of this publication?
Artists are often thoughtful, sensitive people in my experience, and I think that means, by-and-large, they’re more likely to be aware of the importance of this issue – and to want to do something about it.

Also though, I think we’re all aware of how communication about this issue runs the risk of devolving into cynicism and depression – and beating people over the head with ‘the end of the world’. As we know, this isn’t always the most effective way of stimulating people! But the fact is that it’s also an exciting issue. The end of the world! Political and corporate malfeasance! Media corruption! I mean, this all represents a rich seam for artists, and I think as a storyteller and a creative it’s actually something really motivating and exciting to get involved with. I kind of wonder whether this isn’t the way we should be approaching climate change – with excitement and energy. What a challenge it represents!

Who else inspires you in the area of creative responses to climate change activism?
Lisa and I formed the High Water group partly because of a feeling that there weren’t enough creative responses to climate change happening, and we wanted to do something about that. However we’ve seen more and more climate change-related work coming out of late, which is terrific. I was particularly struck by Kathy Jetnil-Kijiner’s wonderful poem delivered at the the UN. I’m also quite taken with the new book genre of ‘Cli-fi’ – climate change fiction, and I’d encourage people to look it up. New Zealander Gareth Renowden’s The Aviator is a cracking read, as is the more sobering The Dog Stars by Peter Heller.

To order your copy of High Water, visit www.factioncomics.co.nz. In NZ? You can also pick one up at your local comic shop.